Biggest factor in getting people to try Firefox: a recommendation

According to the Firefox in your country survey (1st round), the biggest factor in getting people to try Firefox is a recommendation from a friend or an expert.

Here's the exact question we asked you: What do you think is THE biggest factor in getting people to try Firefox?

And an overview of the results: 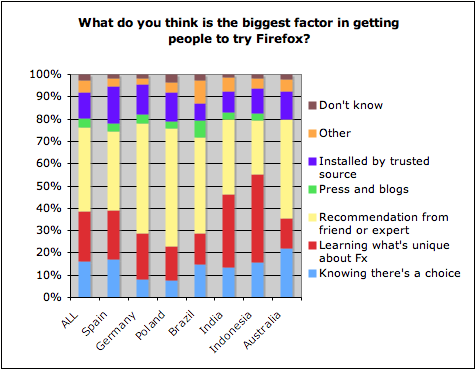 Remember that we asked about the biggest factor. It is safe to assume that most of the options had some influence over the decision to install Firefox, but I see the biggest factor as the reason to finally make the switch.

Note: The data below highlights some of the statistically significant differences between groups. Remember that in each case we're comparing a group with its peers. For example, people who have been using Firefox for more than 2 years are compared to people who have been using Firefox for other amounts of time or aren't using it. In all cases, having a group more or less likely to have picked an option does not mean it's their top choice, just that people in the group were more likely than in other groups to choose the option. Also, the overall numbers include all responses, including those coming from countries not targeted in the pilot.

Now let's take a closer look at the results:

Recommendation from a friend of expert (37.7%)

This confirms the Q3 customer survey results that show that 55% of people who updated found out about Firefox 3 through a recommendation. The numbers vary between the two surveys because of the samples (a random sample of people who just updated in the case of the Q3 survey, a survey spread by the community in the case of Firefox in your country), and the actual question (How did you find out about Firefox? vs. What do you think is the biggest factor in getting others to try Firefox?). However, both surveys show that word of mouth has been the key factor in increasing adoption of Firefox so far.

Regarding add-ons, I would guess that people recommending Firefox to others typically also recommend specific add-ons. New initiatives like Fashion your Firefox should help introduce add-ons directly to new users.

On the marketing contributors, they probably have seen the effectiveness of word-of-mouth first-hand, as confirmed by the Q3 survey, so continue spreading the word!

Is it that they have had a chance to discover and experience all the cool features in Firefox and wish they had known about them from the start?

It probably means that there is still work to be done in making sure people know they have a choice, and in explaining what the open web is and why it matters.

Installed by a trusted source (12%)

This choice is somewhat similar to the option that says "a recommendation from a friend". Here we wanted to capture how many people thought that having to download and install Firefox themselves would be a major hurdle.

Firefox's market share in Germany is fairly high, and press coverage of browsers is quite extensive, so it would explain why knowing about the existence of other browsers might not be such a big issue there.

This is similar to Germany: Firefox market share in Poland and press coverage are fairly high.

Round 2 of Firefox in your country is underway, check it out.