What's the most compelling Firefox feature? Tabs of course!

According to the Firefox in your country survey tabbed browsing is still viewed as the most compelling Firefox feature!

Here's the exact question: What do you think would be the most compelling product feature for people who you know?

And an overview of the results: 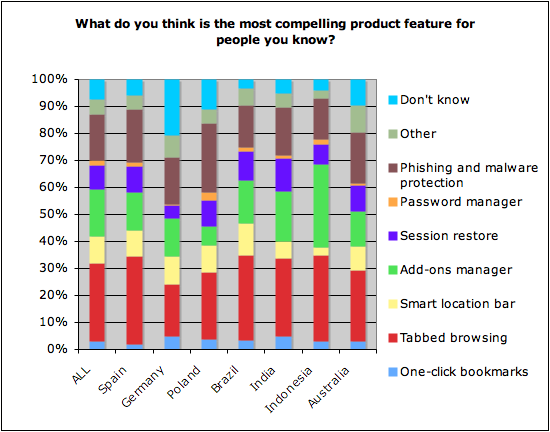 Now let's look at the details: who picked what feature?

Note: The data below highlights some of the statistically significant differences between groups. Remember that in each care we're comparing a group with its peers. For example, people who have been using Firefox for more than 2 years are compared to people who have been using Firefox for other amounts of time or aren't using it. In all cases, having a group more or less likely to have picked an option does not mean it's their top choice, just that people in the group were more likely than in other groups to choose the option. Also, the overall numbers include all responses, including those coming from countries not targeted in the pilot.

Overall, tabbed browsing is the most frequently selected feature, ahead of the add-ons manager and the phishing and malware protections. It is more likely to be chosen by people who have been using Firefox for a long time, which might indicate that these users know how to make the most of tabs on Firefox (since there are many clever tricks with tabs, even more if you have add-ons). It could also indicate that these users still remember the time when only Firefox had tabs (you can see that people who use another browser as their primary are less likely to have selected tabs).

The smart location bar ("awesome bar") is less likely to be chosen by Firefox 2 users (5.8%), which makes sense since the feature was not available until Firefox 3. What the surprising was that there was no difference between the people who have been using Firefox for a long time and new users, or depending on how much time people spend on the Internet. The awesomeness of the awesomebar increases as you use the browser more, so I would have expected a different result here.

The hypothesis here is that session restore is more popular with more recent and "light" Firefox users: people who have used Firefox for 2-6 months were the most likely to choose this feature (I would guess that the less than 1 month group has not discovered the feature yet), people who have not installed add-ons, or aren't sure what version of Firefox they use also were more likely to choose this one. Maybe people who have been using Firefox for 2 years or more are so used to the feature they don't notice it anymore?

This one shouldn't be very interesting, except that it's more likely for people using Firefox for less than 1 month (15.6%) and people who don't use it (21.9%) to have selected this option. It's also more likely for people who have not installed add-ons (14.6%). This indicates that features are discovered and adopted over time. So how can we help Firefox users learn about all its cool features sooner?

We're still processing the results for the open-ended questions, more on what "other" are later...

Much like session restore, this feature is more likely to be chosen by newer Firefox users, people who spend less time on the web, and don't have add-ons. A very puzzling stat is that they are more likely to report using Firefox 1, which does not have 1-click bookmarks... maybe there was confusion and people thought of bookmarks in general, or maybe they're not really using Firefox 1.

Just like session restore and one-click bookmarks, password manager is chosen as the most compelling feature most often by newer Firefox users. One troubling stat below is the fact that people who use Firefox in cybercafes are more likely to choose password manager.

The number match the overall numbers, except for one small exception: people in Australia were more likely to pick "other" (9.8%) as their top feature.