Which brand do you know best: Mozilla or Firefox?

In past discussions and research, we have found variations in Firefox and Mozilla brand awareness around the world. This is important to know to make sure we communicate effectively in each country. So we decided to add the question as part of the Firefox in your country survey.

Here are the round 1 results: 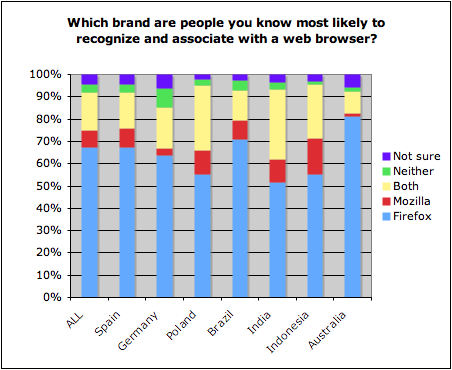 What do you think accounts for the variations in brand recognition? Are they linked to Mozilla's history in the country (did people follow Mozilla from its early days for example)? Firefox market share? Press coverage? All of the above?

As a side note, we realized there might have been some confusion due to the wording of the question: "Which brand are people you know most likely to recognize and associate with a web browser?" Did people select Firefox rather than "both" in countries where people do know the Mozilla brand well because Firefox is the only one they associate with a browser?

We have updated the question in round 2 to fix this, and will report on whether or not the change made any difference.